Are We Spending More or Less on Kids?

It’s stated frequently, the statistical factoid (statoid? statisticoid? hmmm.) that per-pupil spending in Brookline Schools has fallen during the enrollment boom, i.e. between 2006 and now. We’ve added kids, so of course, we are spending less on each kid. We’ve cut to the bone. We’re already underfunding our schools.  Only the maximum extent possible override (MEPO) will retain your property value or keep our schools excellent.

And looking at the data, yes, we’re spending less. But on what?

I guess we do love our kids here in Brookline.

Let’s dig into the data.

What kind of spending are folks talking about when they say we are spending less?

Per-pupil average spending including the CIP

Hmm…that sounds a little wonk-ish. Per-pupil means you’re going to do an average anyways. Let’s mention that averages are often misleading, especially when there is a skew in the distribution, i.e. the level of spending on the special needs population skews the average “per-pupil spending” quite a bit. But let’s stay with it.

Why do folks point to that? The argument is easy – each new child in school means our fixed dollars are spread thinner per pupil.  It is also trying to build a subtle connection between spending and “spending on kids”. That is an important distinction which we’ll tease apart below.

And what about the “including the CIP” bit. Recall the CIP is the Town’s “Capital Improvement Plan”.  The Town pays interest when it borrows money to build buildings, including School buildings.  But there are a good number of other costs the Town pays on behalf of Schools beyond just the CIP. They are all factored into that “including CIP” bit.

So overall that is an …. interesting but hard to understand metric.

Who says Per-Pupil Spending is Down

First written history of it seems to be from the Override Study Committee’s  Schools Program Task Force, which had the executive summary item:

And that position justifies the minority position for a large override – we’re falling behind in how much we spend on our schools.

That leaves out a bit of important nuance. Let’s look at the data at the Massachusetts Department of Education and the Brookline School Departments Budget.

Before we go to the source, let’s get familiar with the Mass Dept. of Ed report for Brookline on spending for 2010 / 2011, the year when folks say things really went down hill for our spending.

Which which items did we spend less money on between 2010 and 2011. The things I colored red in the table above:

What things did Brookline Schools spend more money on? Well, almost everything else.

There are some good nuggets in the budgets that the Public Schools of Brookline publish.

[Aside: It seems that the PSB does not go back and publish “final” budgets, just leaving the previous “preliminary” available.]

Let’s look at pages 317, 319, and 322 of the Superintendent’s Preliminary 2014 Budget (beware 24MB pdf) to get some data on spending from the Schools and the Towns contribution.

Here are screen shots of the PDFs of those pages, starting with page 322,  which is all about…per-pupil spending! Yeah, we found the source.

So the Per-Pupil Spending, using the somewhat complicated methodology described therein, does show a dip from 2010 to 2011 from $17,090 to $16,556. It does mention it includes costs carried by the Town of Brookline spent in support of schools.

Let’s look at page 316 of that document showing net school spending, which shows a high level break out of the “School Department Budget” and “Town Spending on Behalf of Schools”:

As the School Budget points out, the Town contributes to the Schools by paying for things like: school administration, utilities like oil & natural gas for the schools, maintenance of school grounds and buildings, insurance for retired and active employees, pension benefits for employees,  principal and interest on loans for school building projects.

We find a detailed breakout of what categories the Town spends money on behalf of the Schools on Page 319.

Let’s pull out some of that data from those various sources. And let’s also join that with yearly student enrollment data from the DOE so we can get at per-pupil values for those spends. And for good measure, let’s do some inflation adjustments using the Bureau of Labor Statistics. The full table of data used to make these graphs is available at the bottom of this article.

Student enrollment over time and the yearly growth. Yes, it is definitely positive over time.

Here is the Public School of Brookline Budget per year, not including what the Town pays. The line in the graph shows the year-over-year change. Note the jump in 2009, which came from the 2008 passed in to add Elementary World Language and lengthening the school day by 20 minutes.

What has happened to the Town contribution over time? 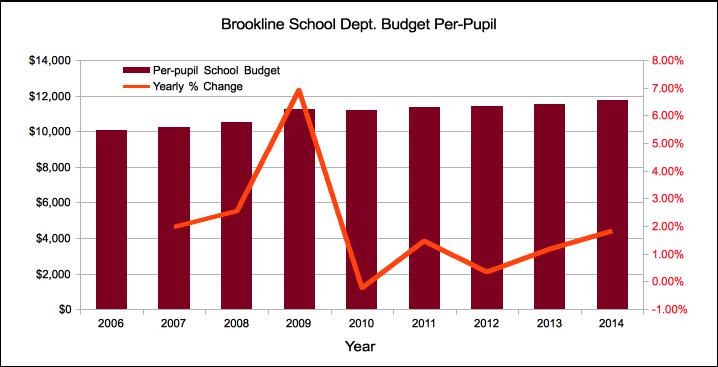 Now let’s look at the Town share of spending on schools per-pupil. Almost neutral except for a big drop in 2011, the year we stopped paying debt payments for Lawrence and the High School.

Finally, what about the comment that per-pupil inflation adjusted spending has gone down? A quick detour to the Bureau of Labor Statistics for an inflation calculator and let’s run the per-pupil School Budget dollars through that to give us that:

The large increase in all those School Budget numbers in 2009 is due to the 2008 Override. The negative year-over-year change in 2011 was due to the items we talked about above: retiring debt from New Lincoln School and also joining the GIC insurance.

Are our kids worse off because we we finished paying off debt and saved a bundle on health insurance? Absolutely not. If the metric you use for “average per-pupil spending” goes down when those two costs go down, then you’ve got a really stupid metric. And that, folks, is what the “average per pupil (including CIP)” metric is when justifying why the next override should be the Maximum Extent Override Possible (MEPO).

A “debt exclusion“, by definition, is a temporary (albeit long ~ 20 – 25 years) measure. It goes away when the project is paid off.  But more importantly, there should be zero surprise factor that the debt is retiring. As in – you can forecast it and build a budget around it.  Thanks New Lincoln School and High School renovation, we’re glad you’re off the books.

Table combining data from the Dept of Education site, the Brookline School Budget, and the Bureau of Labor statistics:

* MEPO = “Maximum Extent Possible Override” , an homage to the BSPACE report findings that several expansions should be done to the “maximum extent possible”.

This entry was posted in Brookline, Override. Bookmark the permalink.