tl;dr Can your local, state, or federal government block you on Social Media? My town blocked my Twitter account and I have no idea why. And I suspect neither do they. What does this mean in the “digital age” and e-government? Time to ask some questions and hold them accountable.

Brookline DPW not on twitter? Ok, I’ll fall back to the general “Town of Brookline”. But strange, I couldn’t seem to find that one either. Until I went directly to the page after looking up their handle on a search engine (and using a private/incognito mode in the Browser).

Well, hello – I’ve been blocked on Twitter by the government of the town in which I am a resident. 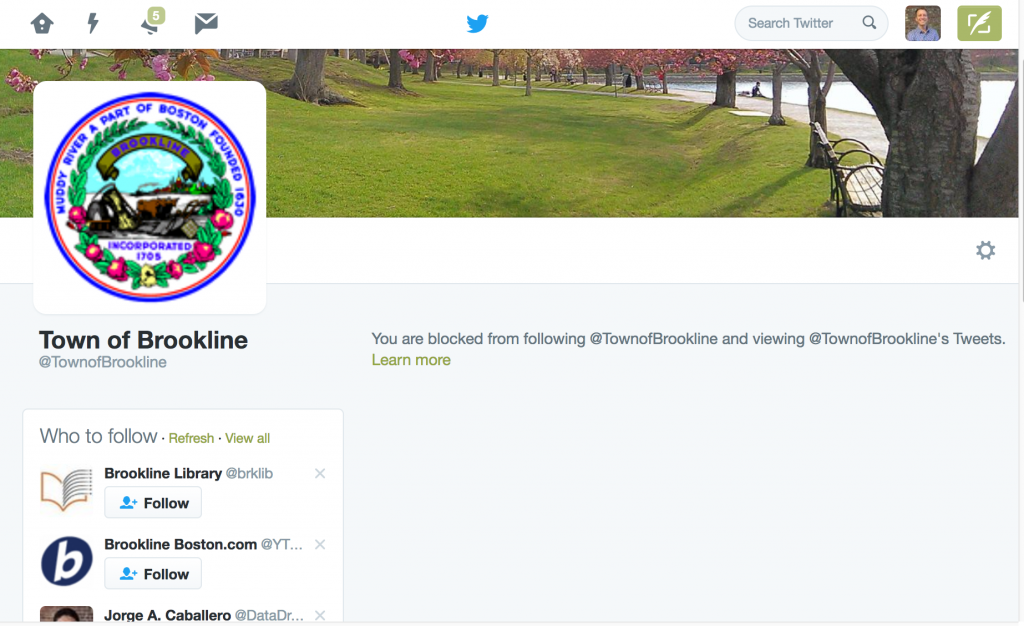 What I saw when I went to @TownOfBrookline on Twitter.

Huh – that’s interesting. Why in the world? And … can they do that??

I hadn’t noticed because…Twitter is blocking their tweets from me. In the busy flow of life, I just had not noticed. Here is what most citizens see, e.g. when using a private/incognito mode of a web browser. Note the alert, celebration announcements, civic actives: 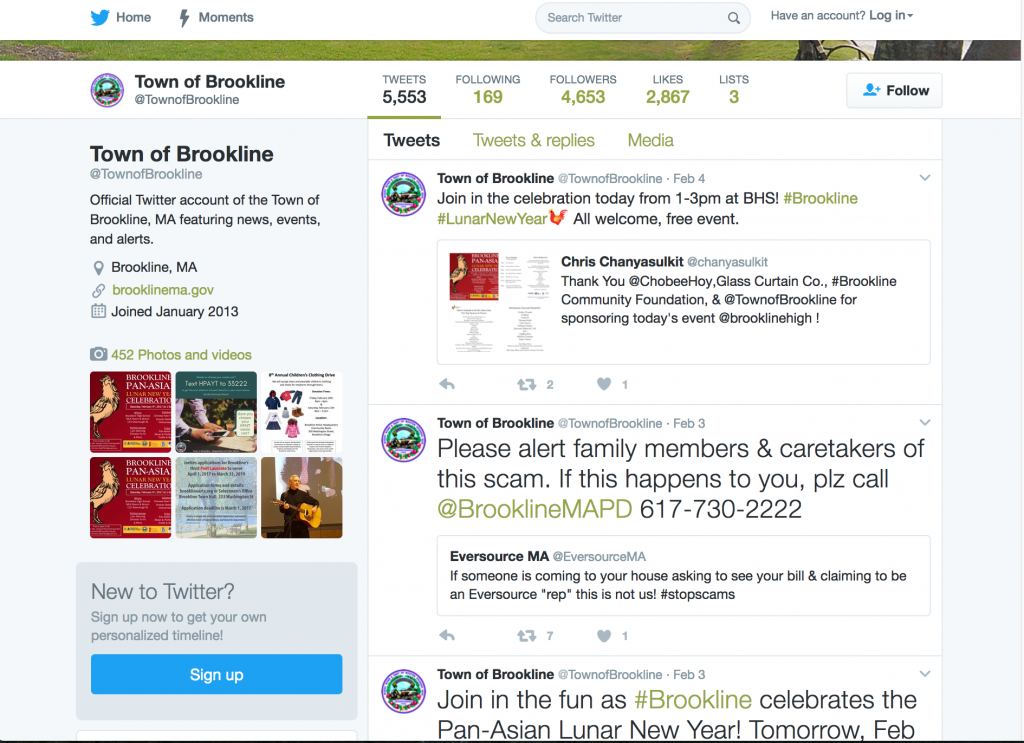 What most folks see when they go to TownOfBrookline

Why’d They Do That?

Why is a resident, citizen, voter, tax-payer actively banned by the Town of Brookline from seeing citizen alerts, celebrations, community notifications?

I did run a political campaign opposing the School Committee and Selectmen on a financing issue for a school capital project. Was this in response to me expressing my political opinions? Probably not.

I have been active on a Town of Brookline Facebook page regarding School issues. Was it that? Probably not.

I tweeted to the @TownOfBrookline on Twitter back in 2015. Is my local governmental being thin skinned about cheeky but factual citizenry feedback? Uhmm…? 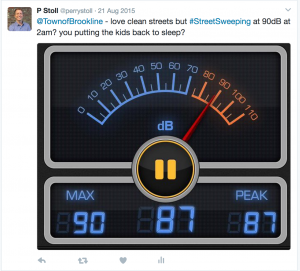 A tweet to TownOfBrookline back in 2015. Yes, I measured it with a decible meter. Do you know how loud 90Db is?

But why do I have to speculate on the matter at all?

Yes, admittedly asking for government accountability on something as small as “Why’d You Block My Twitter Account?” may seem .. odd. small. insignificant. But IMO it really is something larger. Maybe it is the current political climate. But I think the point here is worth some small effort in thinking through how governments communicate and interact with citizens.

Information Wants to be Free-ish

Does your government have the right to withhold or block information from you? If so, under what conditions?

Clearly the answer is yes. Because you and I don’t know all the national secrets, e.g. nuclear weapon specifications, interrogation policies, etc. So in the name of national security, we sometimes say “yes”, certain information should be withheld.

But in general, we believe that the information the government collects serves the citizenry and so should be generally available to them with the specific purpose of holding government accountable for its actions. Hence, we the people have established rules like the Freedom of Information Access FOIA for the US Federal Government. At the state level in Massachussettes, we have Public Records Requests. And having issued public record requests in the past to my town, I can agree with some assessments of how Towns and Cities perform. But details on that are for another day.

Some cities are leading on the open data issue – Boston and Cambridge, MA come to mind. Many are trying. So what does it mean to say that the Town is going to limit access to information from some users?

I suspect this will turn out to be somewhere between a case of governmental sloppiness, thoughtlessness, or an individual acting without thinking it through. But that is no excuse to allow a lack of  thoughtful policy. What types of accountability do they have when they take such action?

I think the salient questions that the Town of Brookline needs to answer, both to me but also more generally:

These are the most basic questions around government accountability.

My Request for Public Records

I go ask my Town how we got here. This will include a making Public Records Request to the Town of Brookline. I’ll probably also go to the Board of Selectmen (our local, volunteer citizen executive branch, equivalent to a Mayor) and ask for their policy around social media and limiting information.

The questions I’ll be seeking answers to include:

I’m a long time believer that governments, in particular at the local and state level,  need to be more thoughtful as they step into the digital age. In particular, there is not enough good governance over digital data.

A recent example in my local town was around traffic cameras. There was strong civic discourse and debate on the topic, something that happened in neighboring towns as well. The police expressed what they wanted too. In the end, the citizens demanded a limited access policy, over a series of compromises, established a system of oversight. Over time and through the power of government ennui, the Police took the rights they wanted, depriving the citizens of what they had established through self-government.

The main issue being – if access to data by government officials could reasonably be used to track, intimidate, or harass political opponents or other expressions of free speech, we need to define proactively the appropriate safeguards and limits to be imposed. And even then, unfortunately the track record on honoring their commitments isn’t great.

Traffic camera data with unfettered access by an angry department head could reasonably be used to track political enemies, a crossed paramour, or student protestors. So policies need to be put in place. In the case of data, they need to address the topics of:

So let me see where this path leads from my town. I’ll get back you on how things go.

This entry was posted in Brookline, SocialMedia. Bookmark the permalink.